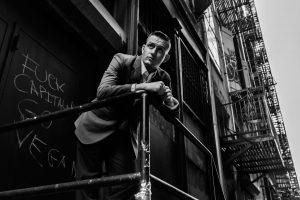 Presidential Powers, or Prezzy, as his friends call him, is a man about his craft, first and foremost. Making music as a cathartic release before ever considering the music business, he speaks from a perspective shaped by the broken promises of the American Dream.

Powers cites George Carlin, the legendary comedian, as his primary musical influence. When pressed further, he explains, “Despite being considered a comedian, Carlin spoke to much deeper social issues without ever becoming an insufferable twat. I rap, but the heart of what I do is try to provide a different perspective on this shit show we’re all living through. I was fortunate enough to grow up during an incredible era of hip hop, and the level of personal dialogue possible when its done right is unseen in any other genre. So, this is the medium I feel most comfortable speaking my truth in.”

Don’t expect a bunch of heartfelt monologues or angry vent sessions, though. What makes Prezzy’s music special is the way the lyrics are put together- rather than direct critiques, he uses each song as an opportunity to paint a picture, using a series of short details like negative space around the larger subject at hand. His true perspective is often defined by what he doesn’t say directly. This replay value allows for many “ah-ha” moments, similar to watching a good movie. You can clearly tell that this is an artist who’s spent time studying the greats; touches of Nas, Roc Marciano, Ghostface Killah and Cam’Ron creep through his New York-bred style, yet the overall tone is uniquely his own.